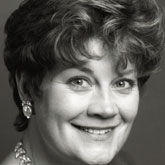 Stafford born Yvonne is a mezzo-soprano who has been hailed as “surely one of the finest singing actresses this country has produced”.

Yvonne was a student of Staffordshire Music Service before studying at the Royal Northern College of Music, Manchester.  She went on to make her debuts with both the Royal Opera Covent Garden and English National Opera in 1991.  Since then she has enjoyed a varied and exciting career in concert and opera throughout the world, taking in concert halls and opera houses in Japan, Brazil, USA, the Middle East and Europe as well as the UK.  Yvonne is a professor at the Royal Academy of Music.

Tasmin Little is an internationally famous violinst who has performed around the world  As well as her regular solo performances, Tasmin has directed and played in orchestras such as the Royal Philharmonic, Seattle Symphony, London Mozart Players, English Chamber Orchestra, Norwegian Chamber, European Union Chamber Orchestra and Britten Sinfonia.

Tasmin is a regular performer at the BBC Promenade Concerts and received the Critics Award at the 2011 Classic Brit Awards.

She was awarded an OBE in the 2012 Birthday Honours for services to music.

Dougie Boyd is a renowned oboist and conductor.  He was one of the founding members of the Chamber Orchestra of Europe (COE) and served as its principal oboist from 1981 to 2002.

During his time with the COE he developed an interest in conducting, then in 2006 he gave up performing on the oboe, to focus on his conducting career.  He is currently Artistic Director of Garsington Opera.

Margaret Hassall is a well-known Staffordshire teacher, accompanist and choir conductor.  She has made an outstanding contribution to music education over many years.  FOSYM has benefited from funds raised in memory of her late husband, John W R Taylor.  She was awarded the British Empire Medal for her services to communities in Staffordshire in 2019.